GBFS is formed when molten blast furnace slag (BFS) is rapidly quenched from the furnace, rather than left to slowly solidify by air-cooling.

On casual examination, GBFS would pass for river sand, with a top size of about 6mm. It typically has a density of about 60 - 70% of natural sand.

After separating molten BFS from the molten iron, the slag can be allowed to run into or to be transported to ground bays to air-cool. There it solidifies and becomes a rock or crystalline BFS.

Alternatively, the molten slag can be quenched rapidly by passing it through a trough of high pressure, high volume water sprays, during which the heat energy contained in the molten slag causes it to explode and instantly form GBFS. GBFS is transported to stockpiles where the material dewaters prior to collection using convention front end loaders. 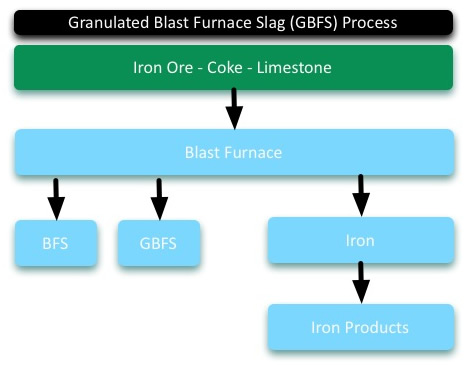 GBFS may be used without further processing as a construction sand, soil/pavement stabilising media or grit-blasting material.

Typical uses for GBFS are: